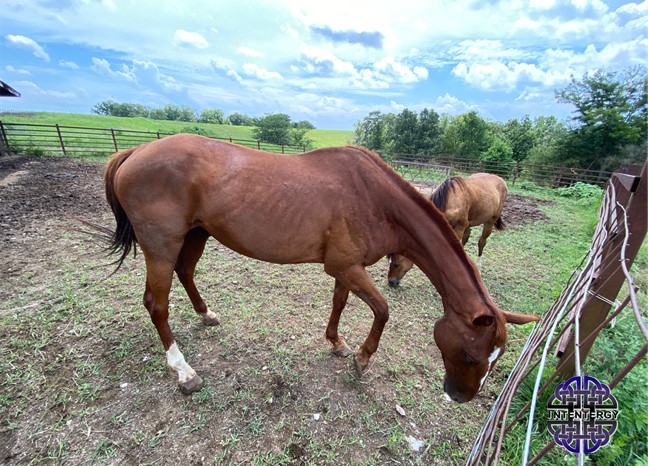 Atticus isn’t just any horse. He is the horse I rescued.

Every year tens of thousands of horses are purchased for slaughter. While horse slaughter for human consumption has been illegal in the United States since 2006, and all horse slaughter houses in the U.S. have been closed since 2007, the international market for horse meat and meat products for other animal consumption is still very viable in Mexico and Canada. Horse meat buyers thrive off the low prices owners put on horses that are no longer deemed useful or affordable. The meat purchasers ship those horses across the border to be butchered and sold.

Atticus was a horse who found himself at auction and purchased by a kill pen buyer. Fortunately, he was bought buy an organization whose horses are filtered through the Peabody Kansas Horse Rescue Pen before going to the kill pen. The Peabody Kansas Horse Rescue Pen has a Facebook page where videos are shown of horses that can be saved. Each horse is featured in a video that includes its age, physical attributes, and price (the meat value). The horses are only “safe” at Peabody for a limited amount of time and cannot be saved once the deadline has passed. Atticus almost missed his deadline.

For a LONG time I have watched the videos of horses and ponies on the Peabody site and rejoiced each time one was marked “SAFE.” (Of course, I want to save them all.)

Recently, my family knew we would like another horse we could all ride. Hubby and I had been “shopping” a lot on equestrian sites and had test rode a few horses, but none fit exactly what we were looking for.

Per my usual I scanned the Peabody Kansas Horse Rescue site in mid-July and there was this nice, sorrel gelding. Nothing fancy, calm, and clearly needing some TLC, I thought, “Man, I like that horse,” but continued on with my search. Well, my friend and personal hero, Amy D., texted that she was considering rescuing a yearling from the Peabody pen and that there was a gelding I should check out. If I liked him, she could pick him up with the yearling. That gelding was the very same one I had viewed half a dozen times thinking, “Man, I like that horse.” So I showed hubby the gelding’s video. The gelding’s (meat) price was $825. A bargain! If nothing else, Amy D. and I could work with him and find him a new home, if he didn’t fit our needs. Hubby agreed that he looked like a nice horse and told me to go for it.

I called Amy D. and she was as eager as I was to bring that horse home. I sent a message to the Peabody Facebook account stating my interest in purchasing the gelding – Lot #788. I didn’t hear anything right away, but I didn’t panic.

After a few hours, I decided to leave a voice message.

Two hours later, I sent a text to the provided number.

Amy D. discovered that they were having some technical issues in Kansas. “Don’t worry.” she reassured me, “It will work out.”

As my blog talk loomed, a flutter of panic found its way into my stomach. I finally received a text around 5:30 p.m. from someone at the stable and the gelding was still there. The office would contact me to pay for him. A call during my blog talk (via Zoom) was going to be awkward, but then a lot of of Zooms are awkward, so I was ready for anything.

No call came during my Zoom blog talk.

They would call me back. (Aaaaaaaggghhhh!)

At 8:32 p.m. Michelle from the Peabody office called. She was sweet and eager to make up for the frustrations of the technology issues.

8:38 p.m. I had the purchase confirmation number. The gelding was mine.

8:45 p.m. Amy D. texted, “They are loaded (on her trailer) and we are heading back. The wranglers just ran them in so fast I didn’t get a pic. The filly (yearling) followed the gelding right in. He has sweet eyes.”
(My eyes filled with tears.)

After receiving my confirmation, I did a quick scan of the Peabody site. Here’s what I saw.

After his arrival, it was obvious we had a sweet horse on our hands. It took a day or two for me to decide on his name. I knew we had searched for a horse that was smart, reliable, and not easily flappable.  Being the literature nerd that I am, I wanted to name him after a character who resembled those traits, and Atticus Finch from Harper Lee’s To Kill a Mockingbird is a solid portrayal of all those characteristics. The gelding would be called Atticus.

I am eager to share our progress with Atticus as we bring him back to full health and he becomes a member of our family. Stay tuned for future Adventures with Atticus.

Atticus and I the day after he arrived.