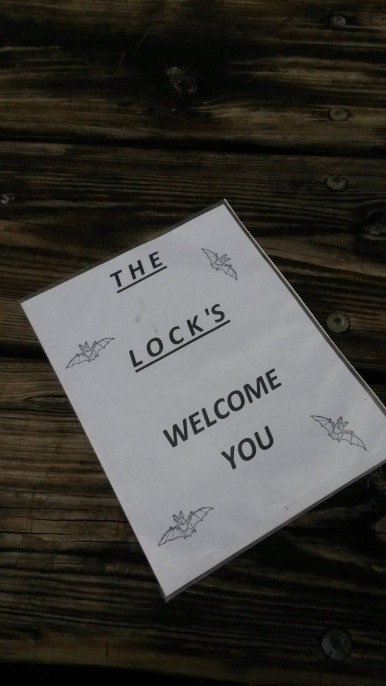 On our recent camping trip, we experienced some embarrassing but funny mishaps. We arrived at the state park on a Thursday. There were very few campers at the park, so we quickly earned the devoted attention of our camp hosts.

We were greeted promptly and provided doggy bags for the puppy, a park map, activities for the kids, fast fire wood delivery, and a wonderfully friendly history of our hosts’ entire lives. It was nice.

Upon returning with the aforementioned firewood, our hosts talked to us about the different types of fire building techniques. As they critiqued our fire building, shouting and banging started inside our camper. The three-year-old had locked himself in and could not get out. Of course we didn’t have a key, so my husband and I tried to talk him through the unlocking process with no luck. Our camp hosts patiently sat in their golf cart and called out advice and offers to go get their camper keys.

The three-year-old soon grew tired of our coaching and climbed up on our bed in the camper, stuck his face out to the window screen, and sang, “Nah, nan, nah, boo, boo.” This received tremendous laughter from our other two children and the camp hosts, but hubby and I were not as amused. The hosts then said they would go get their key for us. In their absence my husband got the idea to send our daughter through the hole under the fold-up couch. He was able to hold the seat up long enough for her to climb through and unlock the door (just in time for the camp hosts’ return.) We thanked them and assured them we were set for the night. We were wrong.

An hour later we were making dinner and my daughter ran to get something out of the truck. The door wouldn’t open. Apparently, while hubby and I unloaded everything and the kids played in the truck, they accidentally locked the doors (with the keys in the vehicle.) We did not have a spare set and there was no cell phone service in the park.

We finished up supper. The kids and I went on a hike, so Daddy could use what wire he had to try to unlock the truck. We walked for a while, made our way to the playground for half an hour, and headed back to the campsite and saw a scene I will never forget.

My husband had wedged three large sticks into the door and was attempting to unlock it with a piece of thick wire, and had an audience of two very “helpful” camp hosts. The kids and I just kept walking. I knew he didn’t need our help.

30 yards past our campsite, we heard the truck’s alarm start to go off. My husband set it off in his unlocking attempts.

Fortunately, the alarm frustrated him to the point that he shoved the wire in far enough to hit the unlock and our vehicle was once again open. The camp hosts were thoroughly entertained.

Later, they brought over another camp host and introduced us as the “Lock” family.

The next morning my husband needed to check on things back at the farm, so he drove to a spot where he could get cell phone reception. He came back and we had breakfast. After breakfast we planned to go on a cave tour. All of the brochures said sturdy footwear was needed. There was a problem.

My husband could not find one of his tennis shoes. When we asked the three-year-old if he had seen Daddy’s shoe, he smiled really big and said, “I hid it on the truck last night.”

“Where on the truck?” we asked.

A thorough search of the truck failed to produce the shoe and we sadly came to the conclusion that he probably hid it on a tire or in the exhaust pipe. We slowly drove the length of the road between our campsite and where my husband made his phone call to see if we could spot the missing footwear. No shoe could be seen.

When we returned my husband was adamant that we not tell our camp hosts about the missing shoe, and swore that if they brought it to us he would deny ever seeing such a shoe. I think he had enough of their helpful comments.

We did make it to the cave tour. It was cool. Hubby wore his flip-flops and survived.

When we made it back to the campsite, we found a sign made just for us on our picnic table.

“The Lock’s Welcome You.”

At least we had made our mark on the weekend. We learned some very important lessons.