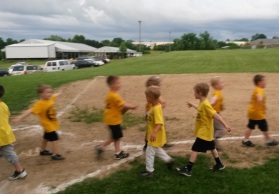 We all know that in children’s sports the game ends with a line up and hand shakes or high fives between the teams and everyone says, “Good game.”

In professional sports the athletes on the winning team line up and congratulate their own teammates, while the losing team heads for the locker room. How did this happen? Who said, “Ok, you guys get paid for this, so you don’t have to shake hands anymore.”?

I would love to see the tradition of “good game” extended past college sports. Recently some  high schools have banned the post-game hand shakes because teams broke into fights during the ritual. Clearly there were bigger issues there than an inability to shake hands civilly. Those coaches and parents need to step up and impart understanding and civility to their players.

Parents and coaches need to be the first ones to show kids how to be good sports and to emphasize that competition is healthy but common courtesy is necessary. Kids need to know that the ability to show grace after a win or a loss is as important as the effort you put into that win or loss.

Yes, always do your best! Yes, winning is fun. Yes, losing stinks. Being a decent human being is imperative.

As you attend the competitive events in the lives of those you love, be sure to compliment them when they show sportsmanship along with athleticism. Point out the good attributes of your competitors, as well as those of your team. Good play is good play no matter who kicks the ball, makes the shot, or throws the out.

We all have something to contribute to our teams, and one of the most admirable skills is that of sportsmanship.

So put your hand out for a shake or a five and remember that “good game” means just as much as good play.