Will Schwalbe is one of my writing heroes.

Will has written: SEND: Why People Email So Badly and How to Do it Better (2010), The End Of Your Life Book Club (2012), Books for Living (2016). He does a terrific job of making connections with his readers because of his writing style and powerful messages.

It is Will’s practice to ask everyone he meets, “What are you reading?”

This question never fails to elicit amazing responses or conversations from those who are asked. Even if the person being asked isn’t a big reader, there are always books or stories from the past that seem to create connections for those in the conversation.

Recently our family took a trip to a state park. During a few of my MANY trips trips to our cabin, I noticed a gentleman reading outside his lodging. After the second day, I stopped and asked him, “What are you reading?”

“Oh,” he said, “nothing that would probably interest you.”

He was reading a Western novel by William Johnstone.

As an avid reader, former bookstore employee, and proud possessor of a soft spot for Westerns, I began to list off some of the series and books that I happened to know were written by William Johnstone. He was tickled by my knowledge and appreciation for the genre.

He then told me his name was Richard. He was from Texas but had served in the military. At one point Richard was stationed at Fort Leonard Wood, which is only an hour from where we were located. That’s how he ended up in a state park in the middle of Missouri, reading Westerns, and talking to a fellow bookworm. I told him about the book I was reading at the time, Nashville Chrome by Rick Bass.

Nashville Chrome is a book about the Brown family. The Brown family was the original harmony group that inspired artists who became the heart and soul of country music. The Browns also happened to be close friends with Elvis Presley.

My new friend was totally impressed with my knowledge of “old Country Music“ and books. In fact he was so impressed that he gave me the book he had just finished reading.  Entitled “Those Jensen Boys! Ride the Savage Land,” the book promised some serious Western adventure.

As life always happens, my children needed me so I said, “Thank you for your service to our country and the new book” and “Good-bye” to my new friend. Later that night a storm rolled in so we were forced to stay in our cabins. You better believe I dove into my new book. 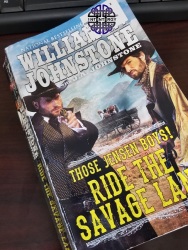 It was all I could have hoped for… two haphazard brothers, five mail-order brides, bank robbers, broken hearts, and rogue Indian attacks. (Westerns really are an underappreciated genre.) My one regret was that I did not have a book to give Richard in return.

The great thing about this story is that I can share it with others and hopefully inspire them to ask, “What are you reading?” Or maybe to share a story with someone new and find appreciation for others that wasn’t there before.

This week I encourage you to put some energy into making a positive impression on someone. Let your purpose be to make connections and share something that could be missing in the lives of others. Just as Richard shared his book and humbled me with his generosity, you can remind someone that there are a lot of happy stories out there.

P.S. I would love to be a Western novel heroine! Shooting, riding, escaping danger with every turn… It would be wild!

P.P.S. Will Schwalbe really is one of my heroes, even if he isn’t in a Western novel.

2 thoughts on “So What Are You Reading?… (Read this even if you don’t like to read.)”