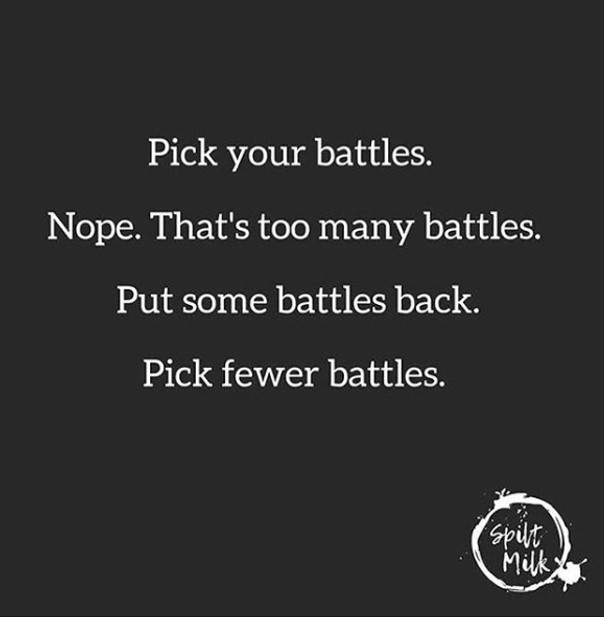 Put some battles back. Never will I claim to be an expert at saying “No” to volunteering. Never will I raise my hand and say I am the best at walking away from being too busy. Never will I be a poster child for those who are willing let someone else do everything, but I will be the first to sign up for this Instagram message.

Instagram is a social media platform that I am growing to enjoy more and more, but it still overwhelms me (along with Twitter). Today this sweet reminder found its way into my feed and I thought, “Boy, did I need that!”

Okay, so I know the world spins on a tilted axis, and that the battle between good and evil is one that will wage until Armageddon, but there are lots of wonky, unjust, and yucky situations for which we are not called to take up arms.

The barrage of battles reminds me of going to the grocery store, and I have one very solid rule for grocery store shopping. I stick firmly to the rule: If something is not on my grocery list, I am not going to purchase it.

My kids and husband know this rule. They are TERRIBLE at following this rule (Hubby is the worst). For this reason, I never take my husband to the grocery store. When they are with me, I give my children stern, Mom’s-death-stare warnings before entering any grocery/clothing/shoe/farm supply or craft store (Any store really).

I tell my darlings that just because something is for sale and they think they want it doesn’t mean we have to buy it. Put it back on the shelf. Life’s battles are the same.

Just because we see something that isn’t how we believe it should be, or there is an opening that needs to be filled, doesn’t mean we are the warrior for that war. We don’t have to put it in our shopping cart of service. We don’t have to take it because it could be a “good deal.” We can leave it on the shelf.

If life presents you with a situation that will lead to greater challenges, look back at your list of priorities.

Does that battle bring attention to what you value or need most?

Does that battle provide the opportunity to open new doors for yourself or others in an optimistic way?

Does that battle promise to be more trouble/drama/cost/negativity than the victory can produce? (If you answered “Yes,” these are the ones to put back.)

I’m not telling you to high-tail it and run at the first sign of turbulence or to never step up when help is needed, but I am saying, you don’t have to volunteer, serve, or be the fixer for every situation.

As a parent, most of us can relate to the notion of telling our kids to put something back in a store.

Go ahead and walk away from the ones that you don’t have to take on. Say “No” to those that won’t provide positive progress in your life. Don’t sign yourself up for a job that no one wants, when it is a job where no one can win. Sometimes leaving a spot open leads to a change for the better in someone else’s arena. Don’t allow your super self to be depleted because you took on too many battles or destroy the awesome warrior you are because of over-achievement. Put some of those battles back.

P.S. This is dedicated to my friends that always give and need to remember it’s okay to put some of those battles back. You don’t need a receipt. Just exchange them for your own personal peace.

3 thoughts on “Put Some Battles Back”