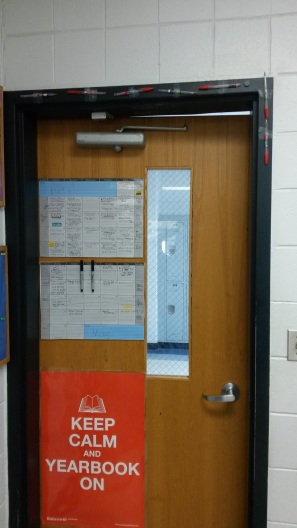 In 2015 I began my red pen trophy wall. This display was inspired by the trophies my husband accumulated over the years from hunting trips. My students always seemed to have more interest in what he was killing than what I was teaching so as each new pen bit the dust, I began my trophy wall.

The wall developed greater meaning when I applied the infamous words of Kathy Rolwes (fellow teacher and lover of the written word), “Ink is love.”

Kathy always tells her students, “Ink is love,” when returning graded work. Her critiques and feedback are loaded with insight, beneficial advice, and love (of course). Her affections are well demonstrated by the inky sacrifices made by her pens.

This school year I added an additional tradition to the retirement of tragic grading pens. I invited each student, who wrote a deadly paper, to give a eulogy for the pen who gave its life to evaluate them. Once this tradition began, my red pens gained a lot more attention.

Daily students wanted to see how much ink was left in my current pen. Even greater attention was paid to whose paper I was grading. Many were curious because they wanted to give a eulogy; most were terrified of presenting a memorial for a writing utensil.

The eulogies were as tragic as the situation. The students did not seem to have an emotional attachment to the pens and were mainly concerned with what grade the pen had given them. It wasn’t until the pen was adhered to the wall that the students found attachment to their sacrificial pen. 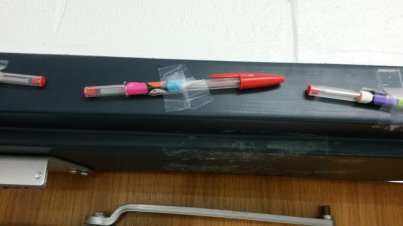 Often I would walk in  to find kids pointing to “their” pen saying, “I killed that one. It gave me a B” (or something like that). This enthusiasm for their accomplishments showed me that my trophy wall wasn’t about getting papers graded. It was about a job well done (hopefully well done 🙂 ) and about being an active part of what we earn from our work.

Those pens may have been my grading trophies, but they represented challenges that my students had faced and conquered.

Today make a memorial of something cool in your life. It doesn’t have to as blatant as a red pen trophy wall, but make it something you can look back on and smile.

If you put energy into the way you purposefully celebrate things, you will reap innumerable emotional and physical trophies.