I am female. Professionally, I hold the same position as many men. I teach. I work cattle and care for turkeys. I am no beauty queen, but Kara McCullough is. In fact, she was just crowned Miss USA this week. 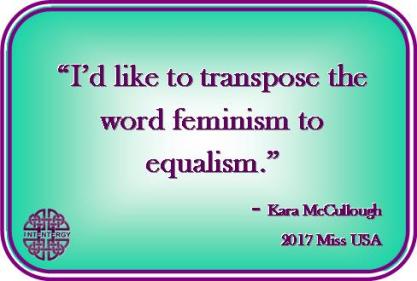 In the interview portion of the pageant, Kara answered two questions that seem to have earned her “ugly” marks from a number of individuals. I saw nothing “ugly” in her answers. Honestly, I found beauty in what she had to say.

McCullough, a scientist at the U.S. Nuclear Regulatory Commission, replied “So as a woman scientist in the government, I’d like to transpose the word feminism to equalism, I try not to consider myself this diehard, like, “I don’t really care about men”.’ Sounds like she understands we are all equals and wants her fellow, male Americans to know that she cares about being their equal, contrary to being on opposing sides.

Not being a card-carrying feminist, I looked up the definition of “feminism.”

In my Webster’s New World College Dictionary: 4th Edition, “feminism” is defined as: 1. rare feminine qualities 2. the principle that women should have political, economic, and social rights equal to those of men 3. the movement to win such rights for women.

Okay, so based on Webster’s definition, I could see where some might get huffy. Is the goal for each American to have there right to enjoy political, economical, and social freedoms across the board? Do I have to be a feminist to support these ideals? I wanted to make sure I was not completely out of the loop so I checked one more source (the one most people go to)… Google.

I searched “Feminist views of men.” An article by Brian Klocke caught my eye and did a sound job of explaining the beliefs behind why men are the problem, the ambiguity created by feminism, and the role they consider appropriate for men to play in the movement, “While some radical feminists may take an essentialist position that feminist theory construction is only possible by women other feminists will insist that men can participate in feminist theory, under certain conditions.” Okay, so can men allowed and/or capable of supporting the feminist agenda or not? Mr. Klocke was not against in the feminist movement. He was very much in support of leveling the playing field, but his information left me feeling out of sorts, as I am sure many feel as well on this topic.

In addition I found an article from the Washington Post by Cathy Young, “Femisists treat men badly. It’s bad for feminism.” In Cathy’s article, she explained why most of us believe feminists are anti-man. Kara McCullough’s remarks mirrored these exact points when she expressed her desire to not be a man-hater.

How can a man-hater be Miss USA?

Kara understands that the essence of America is in equality not in what gender we support. She shared her honest understanding of sexism based on her success as a scientist (a career typically thought of as a man’s job).

As for her remarks about healthcare being a privilege.

privileged to live in a nation where healthcare is an option. It is up to those of us who are able to work to do so. If you have the ability, you should have a job. Of course, there are those who need our assistance in obtaining healthcare, particularly those who have severe physical and emotional disabilities. It is not the government’s job to hand out healthcare benefits. The government’s job is to protect our right to obtain and be covered by reliable, affordable healthcare. (Something we are struggling with greatly.)

Miss McCollough made a good point when she said we need workers. For that to happen, we need jobs. America has been on an upward movement with regards to employment. Keep the jobs coming and greater opportunities will be there for everyone. Squabbling about the answers of an insightful beauty queen is not what we need to end division between genders, races, and classes.

Please put your Intentergy into appreciating one another. Be grateful for the opportunities our country provides, including free speech, gainful employment, healthcare, and freedom of choice.

P.P.S. I would like to be a card-carrying equalist. Where can I get one of those cards?

One thought on “What’s wrong with being an equalist? – Wise Words Wednesday”