Some of my friends have made positive and serious dieting choices in order to improve their health and live a more wholesome lifestyle. I will be the first to admit that I am intimidated by their diets. These ladies are so careful and mindful of the food they put into their bodies; I feel like an elephant trampling through our get-togethers with my chocolate, sugar, and wheat-filled foods. (I don’t have chocolate, sugar, and wheat in EVERYTHING, but I do like them A LOT.)

Last weekend I was blessed with the opportunity to have an overnight girls’ getaway. Woohoo…

That was until I started to think about what food I should bring. What if I brought something someone is allergic to or something that they had spent the last 10 months avoiding??? What was I going to do?

I did what any modern age, intelligent woman would do… I found recipes on Pinterest.

All four of us really like breakfast and we all LOVE pumpkin. I found a recipe for Paleo Pumkin Pancakes. It was super exciting because the recipe only called for five ingredients, and I had all five on hand.

As my nervousness over meeting everyone’s dietary needs continued, I shared the recipe in a group message. My friends all said the pancakes looked “perfect,” so I planned to make Paleo Pumpkin Pancakes. What could go wrong?

Well, first of all we used a full banana instead of half. We were supposed to add the eggs last, but added them second. Not sure how long to let them cook, I flipped the flapjacks a bit early creating paleo pumpkin piles, and then I kind of let the pan get too hot, mainly because I was so busy asking questions about the Paleo diet.

Here is a picture of my first batch. 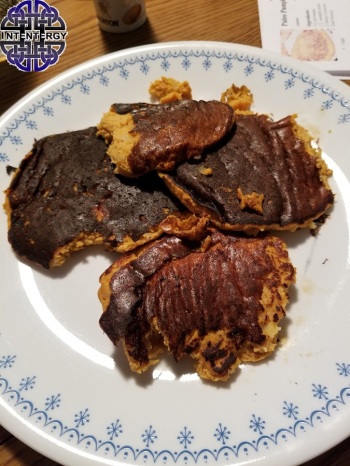 The first batch definitely didn’t look appetizing. On the flip side, the pancake piles tasted pretty good. (I was really glad I brought bacon too.)

After reviewing the recipe steps and learning from the failed appearance of my first hot cakes, the second and third batches were much prettier and tasted even better. 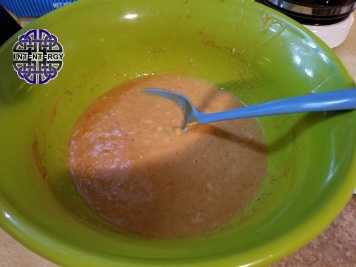 Because I am a ding dong and the last pancakes were so good, I forgot to take a picture, but here is a snapshot of what the successful batter looked like.

It felt good to eat something that was on the “healthy” side, but my will was too weak and I added just a touch of butter and “real” syrup to the pancakes on my plate. It was my own version of paleo-perfect.

As you wrap up this week and look forward to your weekend, I encourage you to consider trying something new and/or healthy. Be open to change and accepting of the practices of others. Put some paleo in your pancakes or substitute a slice of chocolate cake with a cup of cashews. Work to get the most out of life by taking part in the best practices for protecting your health. It may not look or feel quite right in the beginning (like my first pancakes), but the end result could very well be a perfect picture of a healthier you.

P.S. I usually don’t like banana in anything, but straight from the banana peel. I DID like this banana-based recipe.

P.P.S. The Paleo diet is not for pansies.