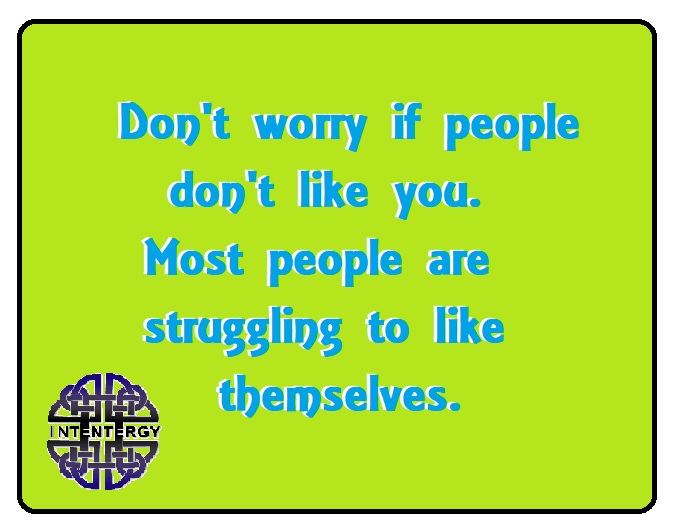 “I don’t care what they think.”

“Who do they think they are? Judging me?”

“Seriously, why do they think they are better than me?”

How often do we find ourselves making these snarky statements?

Our rhetoric for these loaded comments usually shows itself when we feel like someone does not like us or something we do. We immediately go on the defensive and throw down the I-don’t-care-what-you-think-of-me jargon, but inside we are battling the why-don’t-they-like-me fight.

Some of the snarkiest people I have ever met are also some of the most insecure individuals I have known. To inflate their self-perception, they preach a degrading dialogue about anyone they think they bring down. The problem with this kind of judging is that the hurtful words usually become flames in the fire of burning bridges for future friendships and work experiences.

Let me give you a for instance: When I was in college I worked for an entertainment retailer. My job included working in the book department, the cafe, and training new employees. I loved that job. There was one associate, who we will call Adam. Adam did a nice job on register and worked well with customers on the floor. He eventually made it to the ranks of shift manager. After becoming a shift manager, for whatever reason, Adam gradually became unhappy with the company. He put in his two weeks notice. One night while closing the store, I overheard him tell another associate that he never comes to work for his last day at any job. Well, I knew what was coming and planned to come in the day of his last shift. We were going to be short a manager.

After failing to show up for his last shift, other associates began to tell stories of the things Adam said about the store manager, other shift managers, and myself. It wasn’t very nice. I was hurt because I always thought Adam liked me and the others.

The next holiday season, we had a new store manager. She was doing a tour of the store with new hires. Adam was one of the new hires. I smiled and said, “Hello.” He greeted me quite boisterously saying, “I’m back,” with a happy smile. As soon as the new hires finished their tour, I called the store manager into the office and explained Adam’s grounds for leaving the previous year. The manager called him later to let him know it wasn’t going to work out. He was fired. Clearly, Adam was someone who was not happy with himself or he would have found a way to be positive and committed to the position. He would still have been employed and my friend.

I know I am guilty of going all judgmental at times, but I really, really try to always have an open mind and be accepting of others. When it comes to asking myself, “Why don’t they like me?” I usually have to turn the tables on myself and say, “Why don’t I like myself enough to not worry about them?”

When someone is not accepting of my words or actions, it is probably because what I have said or done is different than what they are used to and that results in their rejection or negative responses. They are not struggling with me; they are struggling with their own discomfort.

Put your energy and intent into including and appreciating others. Be positive about your own self-image and support others with acceptance. Don’t worry about being liked. Worry about liking yourself.

2 thoughts on “Don’t Worry…They are Struggling Too”