Frequently we hear warnings about karma, but rarely to we heed those foreshadowings. Well, this week karma came right around the corner and whacked me.

Our dishwasher sits under the peninsula of our kitchen counter. When the dishwasher door is open, I always tell the kids to quit running through the kitchen; somebody is gonna get hurt.

Wednesday evening was a particularly persnickety evening in the Peters’ household. No one seemed to have their positive pants on. The kids could not and would not stop fighting. I begged, screamed, and threatened torture, if the laundry did not get folded and put away. Constant was the need to say, “Stop fighting! Stop hitting! Stay out of other people’s space!” (It was a rough night.)

All that crabbiness came to an abrupt halt as I stomped my way back into the kitchen (for like the hundredth time) to try and get the dishes done. That darn Karma was waiting to waylay my shin. And, boy, oh boy, did she get me. I ran smack dab into the dishwasher door.

As the blood immediately gushed from my leg, so did a four letter word from my mouth. I grabbed a towel and shouted for a band-aid. Eager to get away from folding laundry, my oldest son ran to the hall closet and brought two band-aids, just in case. 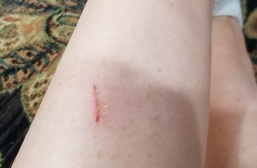 After bandaging my booboo and reassuring my now-much-calmer family that I was okay, I limped back to the kitchen to get those darn dishes done. My anger and frustration seemed to have fled with my four-letter word, and now all I had was exhaustion, a sink of dirty dishes, and a busted shin. Why did I have to get so mad?

It took drawing blood to remind me that hurtful words and angry answers were not the way to get things done. I needed to slow down and encourage my family to help me, rather than demand they do those chores. Karma was waiting around that corner to show my kids that grumpy and grouchy are not the best ways to ask for help.

Two days later and my shin is still super sore, but the tenderness in my leg has served as a constant reminder to be kinder and gentler with my requests and to not rush the demands of the day.

Karma is a butt-kicker. Be careful with your words and actions. Let kindness and leniency lead you to productivity. Keep your jets cooled when things aren’t going your way. Making angry remarks will only result in that angst coming back to you. Karma is always waiting to creep back into your life.

Don’t let Karma be the thing that teaches lessons in your life. Let positive energy and considerate control be the impact makers for your remarks and actions. We can’t always escape that cantankerous karma, but we can control the way we speak and act. Keep your shins away from the dishwasher door and your attitude aimed at being positive; you never know what’s around that next corner.

P.S. It eventually took both band-aids. (I must have been really crabby.)